Sin and Its Running Mates 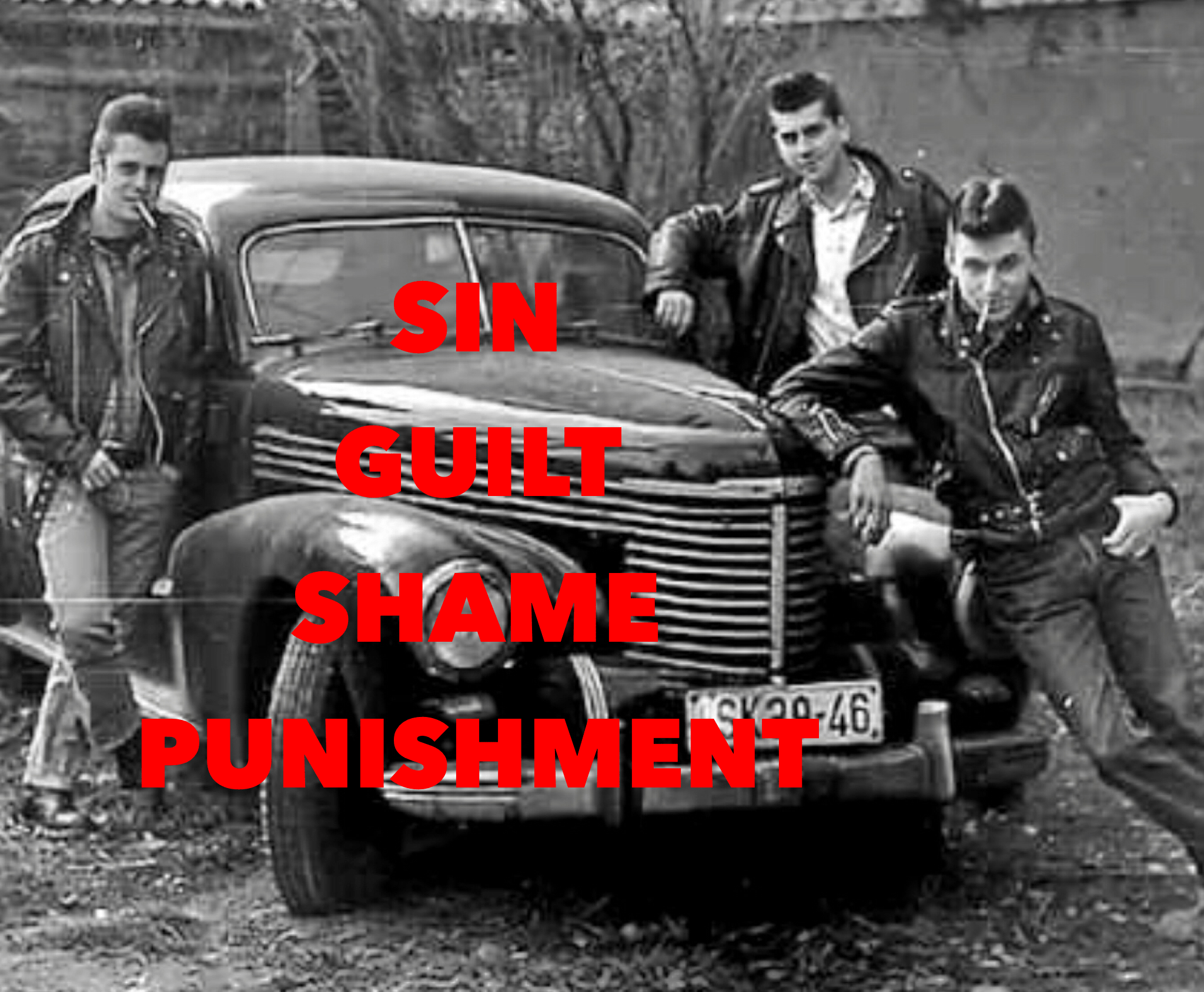 Belief in sin arouses fear. “Do not fear” appears in the Bible more than any other phrase. If just the belief/perception of sin instigates fear- how could it possibly serve us? To believe that your brother has sinned means you are judging him. We are told not to judge.

With cause and effect being primary forces in the universe, the very belief in sin causes sin, fear, judgement, a sense of separateness, guilt, shame, punishment…. Let’s see… Can we pile on any more bullies into the ring to try to knock us out?

Sin- and its running mates- guilt, shame and punishment- are right out back- smoking Camel cigarettes with slicked back hair and muscle tees. They put on a good show. And they certainly parade around like they know the story. But they don’t.

The real story is- we are all one. And if we are all one, like God/Source/Love says we are- as we were created- then no one is separate. No one is special. Special falls to the floor and waits to be swept away with a good cleaning.

So what then- if there is no sin?

What do we do with things like serial killers and wife abusers? What is it when your spouse sleeps with another person? If it is a sin- then you call all of sin’s power (that you just gave it) and all its running mates into existence. And what about this ranking of sin. One is worse than another’s in one person’s eyes, and classed differently in another’s eyes.

What are the classifications of sin? Let’s really look at that. But let’s go about it a different way. Let’s not think about each sin that there could possibly be. Let’s look at the NOTION of sin as a whole. What is it? It IS a notion, isn’t it? What truth does it have? Well- it is a belief. (Those things that start out as thoughts). You think something because you are told it and you give it real estate in your mind long enough to where you really don’t need to even think about it much any more- it just IS. <==. Whoa there! What was THAT! That was a belief turning into reality right there!!! But beliefs are good! Don't get me wrong here!!! Beliefs let our minds rest so we can just BE. With what IS- and that is a good thing- if your belief is intrinsically good and supports God's view of you. That you are one with God, powerful, a creator, and in communion with all that is- including all people. If it does not accomplish that goal- then it opposes how God sees you and falls into the category of a mistake. Correctable. So let's say that the notion of sin is a mistake. How do you correct it? Why would you? Well the why is answered because your primary goal is to be one with God and that includes all of God’s creation. Yes. Even humans. How do you correct it? Think another thought. Here's the thing with correcting a false notion with a true one. Once you accept the truth- the belief follows quickly. The falsehood falls away and there's no "work" involved. No 21-day Brain Detox program needed. No online course in how to change your toxic thoughts. But how do you get to that point?

You have to come to it yourself.

I can think of no other way to do that except to stop listening to the cacophony of voices and listen to your still small Voice inside. This may take a while! Then look at what you believed. Does it pass the test of love? Is it in agreement with how the Creator looks at you?

Ramifications. Oh yes. There are ramifications to throwing out sin. Now how will “he” be punished? How will “she” get what she deserves? Okay NOW we are coming up with the reality of sin. But what is the reality of love? Through love’s eyes they just made a mistake. And you have been given the power and authority to save THEM from the sin (think NOTION here- not modality) that YOU want to be saved from! Because THINK OF IT: all the guilt and shame you’ve carried is part of an accepted- even revered- NOTION that there is sin. You “save” them, and they save you!

As long as your brain wants to hang on to the punishment or shame is the reality of the time it will take. So – don’t hear me say this is easy. It’s not. It’s just simple. The universe has simple laws in play.

We are one giant leap closer to peace, love and happiness! Yay!

Here is my process:

“What will they think?”

“And you call yourself a Christian?”

To believe in a world without sin when it seems to be so TRUE! But that’s just looking at the collective agreement that “we” came up with. I’m more powerful than any duality! How? By the principal of the law of non- dualism. IS-ness. I have the ability to look at this notion for myself. I have the ability to look at how it really fits in with my REAL beliefs. That part that wasn’t taught me but was GIVEN me.

“But what if I’m crazy? What if THEY are all right and I’M wrong?”

<== Ooh! Look there! Dualistic thought. (right/wrong) Thought not serving me. Thought in opposition to what my CREATOR thinks of me! So probably not true! But let’s test it out!

Fourth layer: Testing this out. Ok. I’m open to the notion that there is no sin. What is the cause and effect of this new belief? Here’s what it feels like. It feels like I’m looking around at everyone now and seeing how we are CONNECTED instead of how we are separate. It feels like everyone is now FOR me, since I’m not looking at them as though they could hurt me or attack me.

Last battle: (The one before which everything just falls to the ground, ready to be swept away.) Peace, love and happiness! Reverence for the new belief.

It brings LIFE to me instead of DEATH!

My decades long grip on sin never gave me peace, love or happiness! In fact, it produced the opposite! I am now FREE! I feel as though I am in heaven! (I am. Heaven is an existence where there is no sin) I feel LOVE and a connection to my fellow man and a joy bubbling up inside of me that I can experience NOW! Another universal law of the kingdom of heaven. It’s here and now- and as real as my awareness of it can be! More aware even than the notion of sin because it IS in my awareness which had been dulled. You HAVE to dull your awareness to keep believing in a notion that doesn’t bring LIFE! You dull your awareness by not THINKING!

But what if your brother makes a mistake? The fact that you instantly forgive him and believe he is for you again, corrects the notion of sin. And you have what you give, so he will do the same for you. And then you are in communion. Peace, love and happiness can flow.

What if? What if… Jesus didn’t die for our sin, but died for the very NOTION of it? Just take the possessive pronouns out (your/my/our). What if “sins” could be “mistakes” that were corrected by extending love?